$14.98
Be the first to review this product
Add to Shopping List
Skip to the end of the images gallery 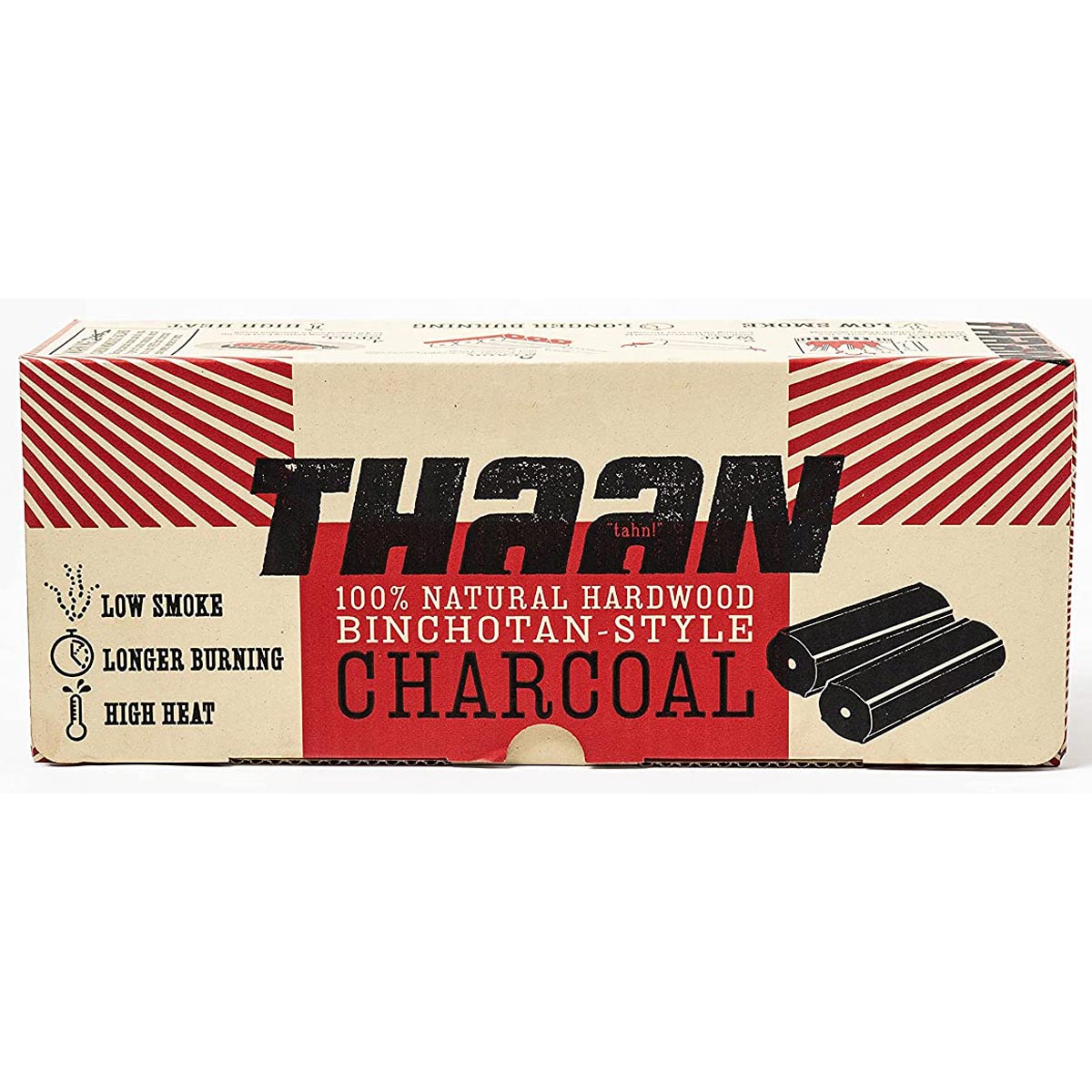 Skip to the beginning of the images gallery
Description

Thaan Charcoal is natural ultra compressed log charcoal. It is a long burning, clean and natural alternative to commercial charcoal briquettes. It is made sustainably from fruit wood orchard trimmings, which imparts a very mild flavor. It lets your grilled food speak for itself! Thaan Charcoal’s consistent, even heat is easy to cook with, and is great for any style of solid fuel cooking: grilling, barbequing, indirect cooking and particularly good where binchotan charcoal is traditionally used.

As Chefs and restaurateurs in Portland, Oregon, we began the search for a better charcoal. In 2014, the year we started Thaan Charcoal, the best alternative to mesquite charcoal was binchotan, which burns cleanly for hours at even, high temperatures. We started ordering a type of binchotan called ebisu, only to find out that it was coming from mangrove swamps in Malaysia that were being rapidly depleted by shrimp farming and charcoal production. “Not only was this a logistical nightmare,” the chef recalls: “It was also an environmental disaster.”

At last, we found what would become Thaan (which translates to charcoal in Thai): a charcoal made from rambutan wood, which is a renewable resource and burns almost as hot as the mangrove charcoal. We tried it, and we were like, “Wow, this is great!” It gives a very nice, even radiant heat, and it tends not to flare up when food drops into it. If you stack it like Lincoln Logs, it will burn even longer—up to four or five hours. Our advice for home grillers: Because Thaan is a much more dense charcoal and doesn’t have any accelerants in it, it doesn’t catch fire as quickly, so you need to use a charcoal chimney and fire starters to start it—and it works particularly well in a small hibachi grill. Once the charcoal is lit, it doesn’t snap-crackle-pop at all; it burns for a really long time at relatively high heat.

REVIEWS
Write Your Own Review
Only registered users can write reviews. Please Sign in or create an account
Q & A

$5 rewarded as 500 Energizer Go Rewards™ points. Must be submitted directly through the Energizer website.

HOLIDAY PROMOTION: Offer open to individuals who meet Energizer Go Rewards™ program eligibility criteria set forth at www.EnergizerGoRewards.com. Void where prohibited. Offer runs from 10/01/22 at 12:00:01 PM ET to 2/28/23 at 11:59:59 PM ET. To participate, purchase, at any retailer, at least $20 (before tax & after coupon savings) worth of any qualifying Energizer® Brand battery and lights products in single transaction. Then, take photo of (or scan) your entire original receipt & redeem at www.EnergizerGoRewards.com/Offers. To submit receipt, registration for Energizer Go Rewards™ is required. You can opt out of receiving marketing communications from the Energizer Go Rewards™ program at any time. Complete offer/program registration form & upload receipt by 11:59:59 PM ET on 3/31/23. You may submit receipt only once. Visit www.EnergizerGoRewards.com/Offers for details on offer limits, full Terms & Conditions, qualifying products and Privacy Policy. SPONSOR: Energizer Brands, LLC, St. Louis, MO 63141.

The Energizer Go Rewards™ Loyalty Program is open only to legal residents of the 50 US/DC who are 18 years of age (19 in AL & NE; 21 in MS) or older. Program launches at 12:01 PM ET on 9/27/21. Program rewards available while supplies of each reward are available. Void where prohibited. Visit complete terms & conditions for details. See Qualifying Products for complete list. Sponsor reserves the right to change or discontinue this program at any time. Sponsor: Energizer Brands, LLC, St. Louis, MO 63141. ©2021 Energizer. Trademarks and certain designs are owned by Energizer. All trademarks are property of their respective owners, and no affiliation or endorsement is implied by their use herein.