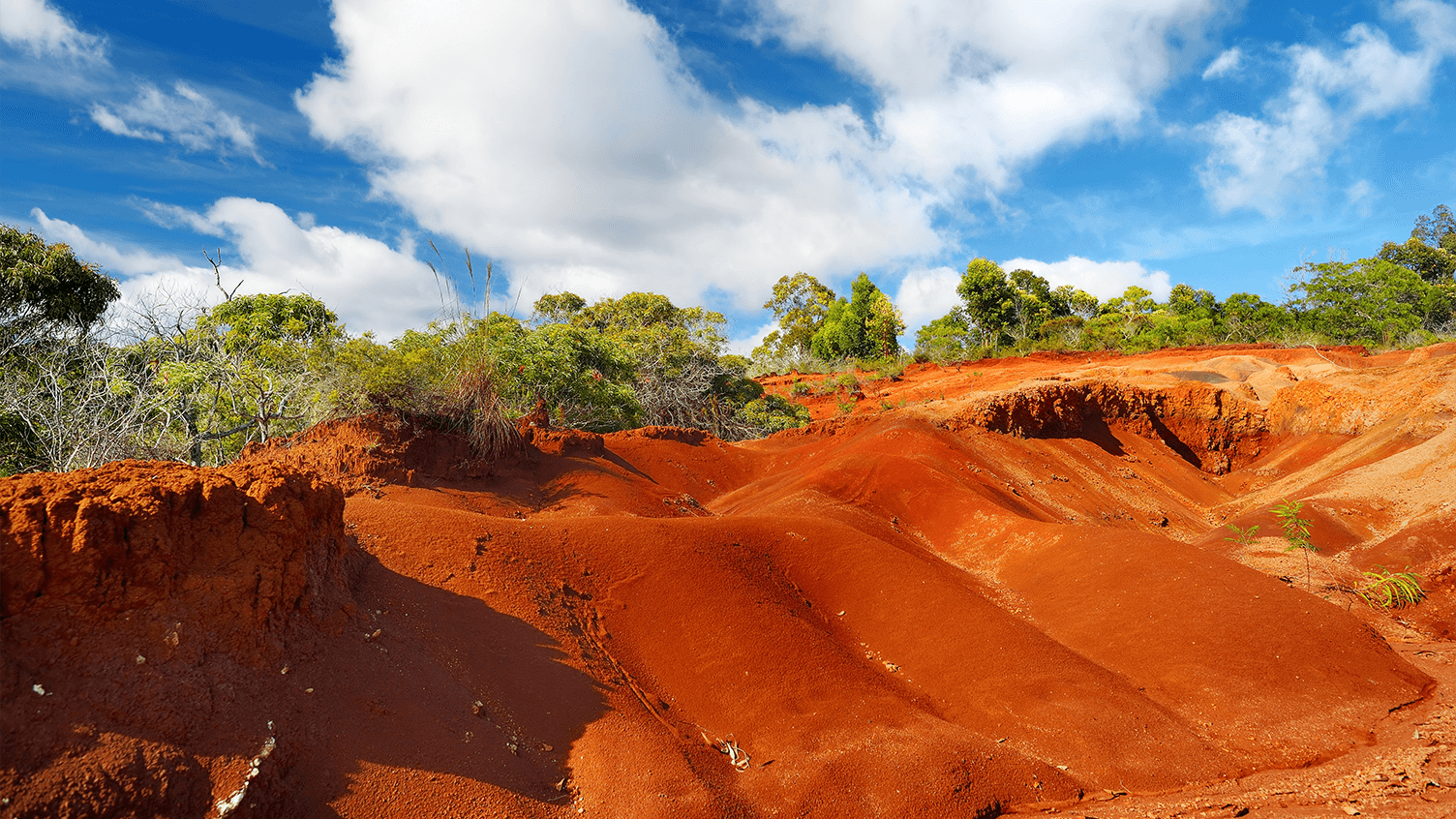 I thought that dirt and soil were the same. There is a difference. Soil breathes life - dirt is dead. You knew that already…

Most of us grew up with red dirt...stains on our hands, under our feet, and embedded in our clothes. When laundry time came, we’d hear it from mom. (Unless you were already doing your own laundry). Our clothes would cycle through the wash a few times or be soaking overnight in a bucket of bleach. To think...red-dirt tees and tank tops became fashionable apparel.

These remedies are not intended for clothing that requires dry cleaning. Before attempting any of the procedures, it’s best to do a pretest.

It’s no surprise that Hawaii’s tropical climate plays a significant part in the formation of red soil throughout the all of the Hawaiian Islands. In fact, the year-round, warm weather puts Hawaii’s soil in a diverse class of its own, especially when it comes to red dirt. Our red soil breathes many wonders...

Red soil is typically found in hot, humid environments that receive a lot of rainfall. If we think in terms of soil classification, most of Hawaii’s red soil is part of an order or group known as “oxisol.” Hawaii is home to ten of the twelve orders in the soil taxonomy system. Interestingly, oxisol exists nowhere else in the United States. Hawaii is the only state to have the kind of red dirt that we do. Hawaiian Red Dirt?

Oxisol soil covers a large area on Oahu and Kauai. Of all the Hawaiian Islands, Kauai is highly noted for its red soil and clay. Being the oldest island in the Hawaiian chain, Kauai has been beaten by the earth’s atmosphere for millions of years. Time has weathered the valuable minerals and nutrients from the soil, longer than any of the other islands. As a result, the depleted soil is left with high levels of insoluble (not by water) iron and aluminum oxides. Aluminum companies have even sought ways to mine Kauai’s soils for the ore. An example of the richness of this island’s red clay is evident in the landscape of the breathtaking Waimea Canyon. If that’s not enough, the salt pond in Hanapepe is a large plot of red soil overlooking the ocean. Edible red clay is gathered from Waimea and mixed with crystallized salt from the ponds to make Red Alaea Salt or Hawaiian Salt. It is oxisol that we’re seasoning our food with...just a thought.

On Oahu, the second oldest island, an abundance of red soil lies across the wetter regions. In the Windward area, where rainfall is greater, popular hiking trails in Waimanalo and Lanikai are still paved with stubborn red dirt. Stay away from these trails at the slightest drop of rain. The red soil can get soft and slippery. Over at East Oahu, we find Kaimuki and its red dirt. The town was nicknamed the “Red Dirt Section” and “Red Desert” because of the large acres of red soil. Homes now occupy the spacious land. In the Central region, deep-red soil covers the hills of Wahiawa and Waipio. In Wahiawa, pineapples still sprout in vibrant fields of red soil. Going towards the North Shore, Waialua Sugar Mill stood for nearly a century and was home to a lot of the town’s red soil. Red dirt stains were still visible on the buildings before the mill shutdown...symbolizing an era when sugarcane dominated the vast fields. Nearby is the Waialua Sunflower Field displaying rows of bright sunflower crowns. Between the fields, red dirt paths extend into the distance of tall sunflowers. The site is worth taking a snapshot of. The contrast of golden sunflowers growing above the deep, reddish dirt...will linger in your mind.

Lanai, the third oldest in the chain of islands, presents us with rusty red dirt. Their red dirt cliffs are beautiful scenic points and popular tourist attractions. Rental cars are often returned splattered with red soil and mud. Molokai has its share of red soil too. Hikers come across red dirt trails while walking or riding mules along the steep cliffs leading to Kalaupapa. We can’t forget the island of Maui. The island is graced with one of the world’s most renowned beaches known as Red Sand Beach. Located in Hana, this remote beach is recessed from the ocean and encompassed by cinder cone hills. The sand is red, BUT unrefined and is made of cinder that no bare feet can comfortably walk on.

The Big Island, the largest but youngest - shows that time has spared this island from extensive weathering. The soil is considered relatively young and composed of volcanic ash, cinder, and pumice. Given some time, thousands of years from now, perhaps...these minerals may weather into bright, oxisol soil. We will never know...

But...we do know now, that the reddish hue in soil was formed from oxidized minerals. It is weathered, old soil, initiated by the movement in the earth’s crust. Certain climatic factors increase the rate of aging. Especially in Hawaii, humidity and rain can leach minerals from the soil. As a result, iron oxides become prevalent in the soil. Hematite, the main ore of iron - is the cause of all those red dirt stains on your clothes, shoes, feet, hands, carpet, car, home, etc.