The history of City Mill is the story of the Ai family and how its founder, Chung Kun Ai (last name pronounced as “Ah-ee”) came to Hawaii as a young boy and eventually started City Mill.

In 1879, at 14 years of age, Chung Kun Ai and his father sailed for Hawaii on a three-masted German schooner from the port of Whang Poo near Canton, China. Chung Kun Ai’s father had traveled to Hawaii eleven years earlier and had established himself as a merchant in Kohala, Kona Coast, Hawaii. With a prospering business, he returned to China to bring his family to their new home.

As a young teenager and speaking neither English or Hawaiian, Chung Kun Ai enrolled in Iolani College (Bishops School) where he spent two years. Although these years represented his only formal English education, the experience profoundly influenced his life. It was here that Ai converted to Christianity, which was to remain the central force in his life.
It was also at Iolani College where he met and developed a lasting friendship with a fellow student, Sun Tai-Cheong, later known to the world as Dr. Sun Yat Sen, father of the Chinese Republic. Their friendship provided a nucleus to formulate the principles of the Chinese Republic. Chung Kun Ai and Dr. Sun Yat Sen often talked about conditions in China. After many discussions it was decided to form an organization and to call it Hsing Chung Hui, which means “The Progressive Chinese Society”. Years later, Chung Kun Ai received the highest medal of honor from the Chinese government for his ability to recognize the needs of the people.

Following his education at Iolani, at the age of 17, Ai’s father bought him a partnership in a tailor shop. However, the business did not appeal to Ai and he left the business in 1887.

That same year, at the age of 21, Ai joined the firm of James I. Dowsett, a prominent businessman in the Islands’ early days, as a secretary, clerk and bookkeeper. Dowsett was engaged in a conglomerate of activities as a leading lumber importer, plantation owner, salt maker, the largest rancher in Hawaii and owner of 11 whaling ships.

Dowsett had noticed the young Ai and asked him if he were interested in working for his firm. Chung Kun Ai was flattered by the request. So, in order to test Ai’s perseverence, Dowsett asked Ai to come back within a month, at a certain date and hour. Ai returned on the designated day and time and was then told to return within a week, at a certain date and hour. Ai returned again at the specific time –– and was hired.
However, after the initial excitement about being hired for the job, Ai was ready to resign after one day. Ai wouldn’t answer any telephone calls, because he never learned how to operate a telephone. Fortunately, after Ai’s frustrating first day, Dowsett’s carriage driver taught Ai how to use the telephone.

Ai eventually became Dowsett’s protege, earning his respect by his careful management of rent collection money. As a result, Dowsett allowed Ai to use half of his warehouse, in order for Ai to start a sideline business of his own. So while continuing as Dowsett’s clerk, Ai started importing cigars, tea, peanut oil, shoe nails and other items.
Following Dowsett’s death in 1898, Ai continued to work at the company, refusing pay, while the estate was being settled. During the settlement, Ai purchased Dowsett’s swivel chair, upright safe and desk and decided to go into business for himself. Those items can still be seen at City Mill today.

The Beginning of City Mill

With $60,000 in capital, Chung Kun Ai started a lumber importing and rice milling business in Chinatown, Honolulu, and named it City Mill. City Mill’s beginning faced early hardships, however. When the business was just eight months old, the bubonic plague hit Honolulu. In order to arrest the spread of the disease, the Board of Health ordered all the buildings in the infested area burned.

City Mill was not within the earmarked area, but unfortunately the wind shifted and spread the fire. As a result, Ai’s entire investment vanished; and without any insurance, he owed $25,000 to creditors. Ai was able to raise the needed capital to rebuild City Mill, having established himself in the community as a man with integrity and business acumen. He rebuilt his business steadily with the addition of new product lines. Then in 1907, disaster struck again in the form of financial panic, depleting Honolulu’s money supply, and leaving Ai unable to pay an outstanding C.O.D. shipment from abroad. Again, Ai’s personal reputation made it possible for him to borrow foreign capital in order to meet his obligations. Again in 1919, a fire burned City Mill. Fortunately, this time, insurance covered the damage. 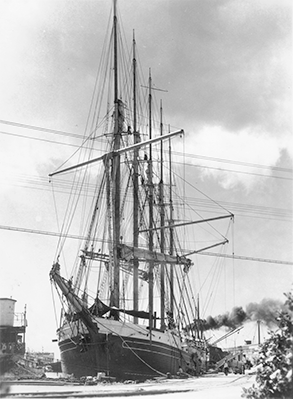 In 1920, Ai commissioned the VIGILANT schooner in Hoquiam, Washington to carry lumber from the Pacific Northwest. VIGILANT carried 2,000,000 board feet of lumber each trip. The VIGILANT was the largest five-masted schooner to ply the Pacific – costing a quarter million dollars. The ship soon became a symbol of Chung Kun Ai’s own unsinkable spirit. It also demonstrated Ai’s personal commitment to bring top quality merchandise to his Honolulu customers, while keeping prices down. By the the early 1920’s, City Mill was so successful that Ai ventured into the pineapple business — the Honolulu Fruit Company, which owned 5 pineapple fields and a cannery. The Great Depression of the 30’s destroyed this business and severely jeopardized City Mill’s prosperity as well.

Prior to World War II, in conjunction with home planning and building supplies, City Mill had the distinction of having the only rice mill in Honolulu and having the largest rice mill in Hawaii. It was the advent of that war which forced City Mill to abandon its rice operation and to concentrate on providing construction materials for the armed forces and civilians. By the war’s end, City Mill emerged as one of the largest building materials suppliers in the Pacific.

Along the way Chung Kun Ai also ventured into other types of businesses with varying degrees of success in laundry, fishing, tobacco and oil drilling.

In 1950, Chung Kun Ai opened the present City Mill store on Nimitz Highway. The building was dedicated to James I. Dowsett, Ai’s mentor, friend and benefactor; the dedicatory plaque can still be viewed at the Nimitz store. The inscription on the plaque reads:
THE HONORABLE JAMES I. DOWSETT, 1829 – 1898. BENEFACTOR AND FORMER EMPLOYER OF C.K. AI, FOUNDER OF CITY MILL CO., LTD. INCORPORATED 1899

“He made a man of me,” Ai would explain, “and taught me all I know.” It was Ai’s character to never forget his friends, living by the Chinese proverb, “When you drink water, always remember its source.” He visited Dowsett’s grave every Memorial Day, a custom continued after Ai’s death by his daughter Clara… a tribute which lasted for 74 years.

Throughout his misfortunes and successes, Ai retained a humility of spirit and generosity toward his fellow man. His devout Christian faith prompted him to share his success with others. He believed that “When you do evil, evil will come to you. And if you do good, good will come to you.” And “I expect to pass through this world but once. Any that I can do, let me do it now, as I shall not pass this way again.” As a result of these philosophies, he supported the shipping of clothing to China, Japan, India, Korea and Okinawa, for many years following World War II. And in 1953, he founded the Chung Kun Ai Foundation. The foundation has, over the past quarter century, aided churches, charitable organizations and deserving students throughout the world in obtaining higher education. Ai was also instrumental in building the First Chinese Church of Christ — the church was completed in 1929. He was one of the founders of the Nuuanu YMCA — the branch which became a symbol of brotherhood for the various ethnic groups on Oahu.

In 1956, in recognition of his exemplary family life, Chung Kun Ai was awarded “Father of the Year” by the Honolulu Chamber of Commerce. In 1957, Governor Samuel Wilder King bestowed upon Chung Kun Ai the “Order of the Splintered Paddle” for Ai’s outstanding service to mankind. This prestigious award, originated by Kamehameha the Great, has been awarded to only 26 people in almost two centuries.
In 1960, Chung Kun Ai published his autobiography, MY SEVENTY-NINE YEARS IN HAWAII. He was 93 years of age at the time and was blessed to live to age 96.

Steven C. Ai, son of David C. Ai, is currently President and CEO of City Mill, assisted by his sister, Carol Ai May, Vice President. As the third generation Ai siblings take the company into the new millenium, updated marketing approaches and consideration for expansion is underway, with new store locations and new retailing concepts. Such is the eventful, multi-phased history of City Mill Company, Limited, and the continuing story of the Ai family. Little did Chung Kun Ai dream that his Chinatown store would emerge into the City Mill that has become a household name in Hawaii today.